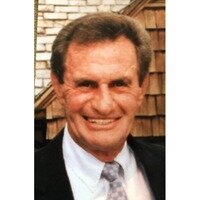 McCarthy, John J. ("Johnny") of West Seneca, NY on Saturday, May 9, 2020 at the age of 86. Predeceased in death by his partner, Claudia Woodrich and survived by his former wife, Dorothy (Pairn). Beloved father of Ann, Tim, John (Sue), Michael (Gail) and Joseph McCarthy. Dearest grandfather of John, Timothy, Margaret and Ann. Cherished brother of Tim (Joyce), Michael, Margaret (Joseph) and Joseph (Sally). John was a graduate of Bishop Timon High School (1951) and Canisius College (1956) in Buffalo, NY. He was considered by many as one of the best basketball players to ever come out of the City of Buffalo. He was an All-American basketball player at Canisius College and is a member of both the Canisius College Sports Hall of Fame and the Greater Buffalo Sports Hall of Fame. He went on to play basketball professionally for seven years for the Rochester Royals, St. Louis Hawks and Boston Celtics, capping his career with a NBA Championship with the Celtics in 1964. John was the first player in NBA history to record a triple-double in his playoff debut when he had 13 points, 11 rebounds and 11 assists against the Minneapolis Lakers in 1960. He was later joined in that feat by Magic Johnson in 1980 and LeBron James in 2004. John went on to coach basketball at the high school (Bishop Neumann), college (Canisius) and professional (Buffalo Braves) levels. He finished his career working for the City of Buffalo. Much more important than his athletic achievements, he was a beloved father, grandfather and friend who lived life to the fullest and shared that life with those he loved. John was passionate about playing all sports, could often be found on the golf course and loved following the accomplishments of his children and four grandchildren. Frater, in perpetuum ave atque vale, resquiescat in pace. Amen. Arrangements by the DONALD M. DEMMERLEY FUNERAL HOME, 21 Pierce Avenue, Hamburg, New York 14075. Share condolences at www.demmerleyfuneralhome.com.